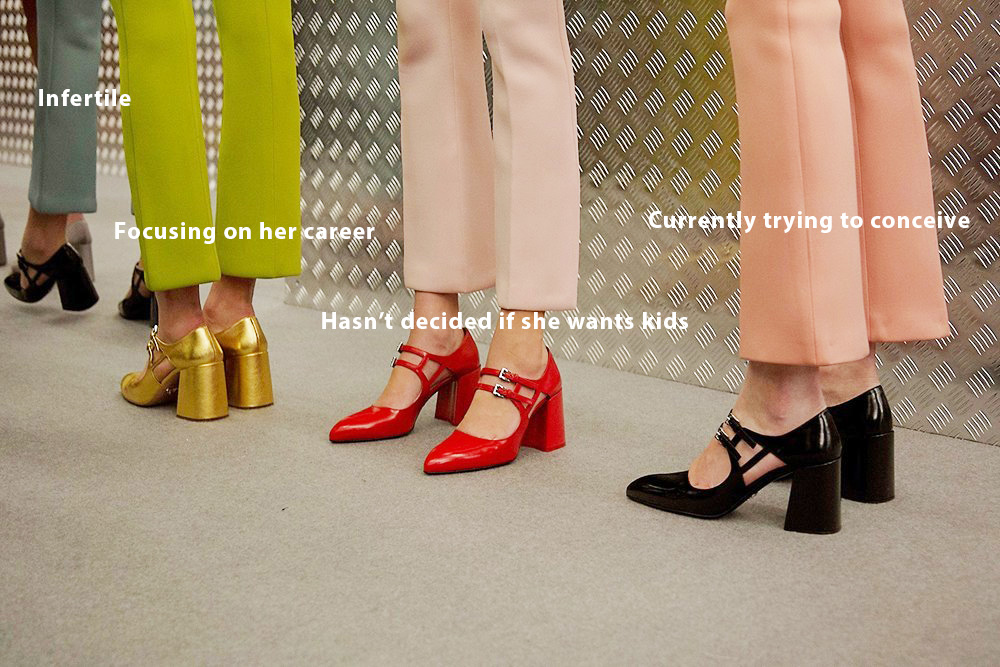 In the vast history of things people really shouldn’t do, two have always remained constant: The first being, people still do them. The second being — and this is the most important part — they really shouldn’t. What are these ambiguous acts I speak of you might ask? Well, asking when someone’s uterus will be accepting accommodations seems like a terribly invasive, tactless, and potentially devastating question to ask, and wouldn’t you know, probably a good place to start. So, yeah, let’s discuss.

If I received a dollar every time someone asked me when I was having kids I’d be able to end world hunger and homelessness, in addition to retire to the moon by the time I was 30. This isn’t an exaggeration (well, maybe it is a teeny, tiny one), but it’s almost always the first question I’m asked — out to dinner with colleagues, in line at the grocery store checkout, etc. I’m fairly certain the day I was born the questions that swirled around the hospital room were as follows: Oh my gosh, she is so little! Is she married? When is she having kids? Respectively, of course. The odd thing is, girls at a young age are pruned to have kids. The idea that girls are given dolls that people refer to — creepily, I might add — as their baby has never sat well with me. Almost creating this subconscious marker for them to be the caregiver or nurturer in the future. Not that being either of the two are negative; it’s the bias and standards that particularly stand out to me.

The thing is, not everyone wants kids. I’m pseudo in this category. Pseudo, because I’m allowing my future self a little leeway (you’re welcome future, Kelly). But to be completely honest, when a woman says she doesn’t want kids, it can be carried with the association of selfishness or shame. Why exactly a woman’s choice to choose her wants and needs would be frowned upon is mind-boggling to me, but this societal standard can lead to women feeling an immense amount of pressure to have kids to fit in, or feel as if something is wrong with them for being different when they state that children may not be the cards they wish to play in this game we call life.

Realistically speaking, not everyone’s the same and where some people may not want children, others may want them, but perhaps aren’t physically able to have them. Millions of people face infertility around the world and asking them about the very topic of family and kids can be devastating and unintentionally insensitive. While I do believe many people are used to asking without thought because it seems like the typical thing to ask, it doesn’t make it any less uncomfortable or hurtful. Other points to consider include someone who may have miscarried, is having problems conceiving, or who may have suffered the loss of a child. None of which would be taken lightly.

Regardless of if someone wants kids, doesn’t want kids, has kids, doesn’t have kids, or is simply undecided, asking someone when they’re having children is an invasion of privacy. Honestly speaking, is there ever a good time to say, “Hey, when are you planning on putting a baby in that uterus of yours?” Whether it’s someone you’ve known for years or may have sauntered into casual conversation with at a backyard barbecue, that information should be willingly offered before the subject is ever approached and even then, it should always remain respectful.

At the end of the day, I understand these are conversations that need to be had, so any individual can be aware of the implications asking these tiny time bombs of a question can have, especially when being asked repeatedly. After all, you never know if you’re person three or 30 to inquire in said individual’s day. I’m hopeful because if someone can understand the impropriety of asking how much money a person makes, which has nothing to do with their physical body, then that same someone can learn to respect a person’s right to privacy.