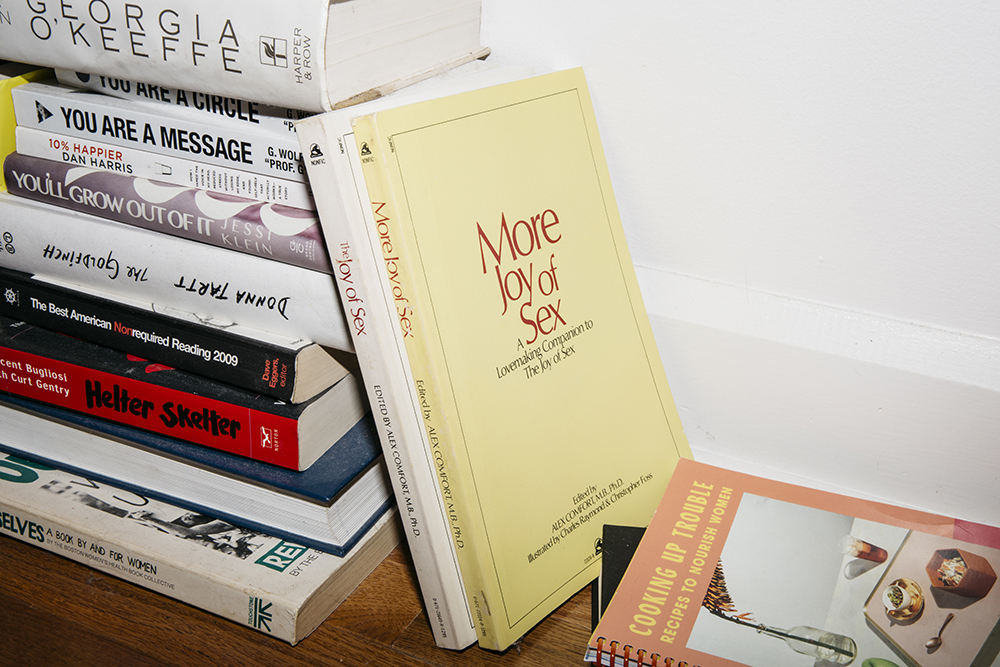 Sex, sex, and more sex. Honestly speaking, the world is vastly sexualized. It’s in our books, on our computers (do people still T.V.?), and it’s on our minds. So how can something we’re all inclined to do be so stigmatized? I set out to interview a few, ahem, sexually experienced over-sixty-somethings and was surprisingly met with alarm.

“No one in their right mind would tell you about their sex life, that’s personal.” The phrase that launched a thousand phrases, as stated by my mother, my first “interviewee”. My mom, giver of life, a two-time cancer survivor, florist, and all around knower of everything felt uncomfortable talking about what should be the most natural thing in the world to discuss. I mean, come on, having figuratively slain health dragons should, in my opinion, leave one a little less inhibited.

I surmise many women — and men, too — feel this shamefulness when talking about sex. As if I’m supposed to believe my mother, who has birthed numerous children, is still a virgin. She hesitantly agreed to be interviewed by me and then proceeded to suggest I interview others besides herself. In the end, I interviewed not one, not two, not three, but four separate sixty-somethings and only one felt uninhibited enough to openly talk to me about her sex life.

“The secret to a lasting marriage is baby oil.” Joyce, 67, states so passively I could have hugged her. After almost 47 years of marriage and three sons later, Joyce, in part, credits the connection her and husband share with their lively sex life. “Baby oil works wonders when grabbing a man’s balls.” She’d extended me an olive branch. One that I could, I don’t know, file in my mental file cabinet under the folders, Joyce Is A Unicorn, 1001 Everyday Uses For Baby Oil, and Things My Non-Existant Sex-Ed Class Never Taught, respectively.

“Which Joyce would you like to interview, I’ve got wigs for my different personalities? There’s Foxy Joyce? Beyonce? Joy? I’ve got plenty, just let me know who you want?” She asked laughingly in the first five seconds of speaking before our interview. So I jokingly replied, “grab them all! You can just line ‘em up and switch out characters throughout the conversation.”

When I’d set out to interview men and women over the age of sixty to discuss sex, I had no idea what was in store or the amount of resistance I’d be met with. For some reason, unbeknownst to me, I thought interviewing anyone about sex would be fairly easy and natural. I laugh at that younger me, still dealing with the Polar Vortex and Mercury in retrograde. Maybe I come across too young for older generations to feel comfortable talking to me? Maybe this was natural selection and my abbreviated stature makes me seem weak and therefore unfit to “learn” of the upper echelons means of existence? Or maybe, just maybe, comfort speaking about sex doesn’t always come with age?

This is where Joyce comes into play. “You have to meet Joyce,” my sister mentioned to me. “You’d love her so much and I mentioned to her that you were interviewing people over sixty about sex and she’d love to be interviewed.” My sister, my literary life vest, actually had three people who expressed interest in being interviewed, but only Joyce volunteered as tribute.

After we’d had normal pleasantries — which included knowledge that up until very recently she could put her legs behind her head — I asked if her comfort speaking about sex was always present, she replied “I’ve always said when you’re in your 20s sex is so good that you think you’re amazing. Now I say in the 20s, 30s, and 40s you’re still not doing anything, but when you get into the 50s and 60s, you really know what you like. You know what you like and you know what you want and how you want it. I’ll say my late 40s is when I noticed what my husband and I had to do for us to really enjoy sex. And not only that, we as women have to explore our own bodies, and that’s with masturbating. You find what you like, how you like it, where you need to be stimulated. These are things you have to teach your partners, and you have to teach them until they get it right.”

“You know, people are afraid of that. I feel like many women — or any gender, honestly — feel as though their partners should just know how to please them and then become upset when it doesn’t happen, but we can’t expect others to be mind readers. Especially if they don’t know themselves what their bodies like.” I said.

“Exactly! And that’s why the teaching comes in handy. You have some women who like foreplay and some women who don’t. I like foreplay. Over the years, my husband came to the point where he wouldn’t do anything until I had an orgasm and that’s from what I had to teach him. He didn’t want me upset, Kelly.”

“You really have to teach your spouse — well, I think partner is better to say — but you have to teach them. I had some women say, even those in their 40s and 50s, that they’ve never had an orgasm. Like, wow. That’s crazy! I don’t know if it’s because they’re afraid to share things with their partner, so to suggest experimenting with each other until they orgasm is something scary.”

“I don’t know, I’ve always been a sexual person and have had so much confidence in myself and my appearance. After I first started wearing wigs my husband would ask, ‘who are you today?’ So I’d make something up. ‘Oh, I’m Joy.’ ‘Today, I’m Jasmine.’ And it became a thing, and I’d say, ‘oh, I’m Beyonce tonight,’ and I’d sing a little bit. Even though I don’t know how to sing, I try. Dance a little bit how I think Beyonce would dance and he likes that.”

After having such an open interview, I asked her why she felt it was so difficult for others to talk about sex, she replied, “I think that, even with me, I may come off jokingly at times, but when someone’s sharing toys or tips, I think I might want to try that, so I’m happy to do the same and share it. They might want to try it. It’s not my business whether you masturbate or not, that’s just part of life. If that’s what you do, then that’s what you do. I just think the information that you have, is just knowledge. I’m 67 years old, I know what makes me feel good, and I’m not going to beat around the bush with that. If that’s something I can share with you, then that’s good. I’m not embarrassed by sharing anything.”

And sharing she did, with her love of incorporating toys into her and her husband’s sex life, being called “too aggressive” earlier on in their marriage, and her varying levels of flexibility, Joyce helped renew my faith in ageless sexuality. Yet, somehow I was still left wondering why it is so taboo to openly talk about sex, even from a learning aspect?

I’m not so narrow-minded to believe that talking about sex and being sexual isn’t necessarily mutually exclusive. I’m sure anonymously interviewed the answers could have varied. Given our previous uterine affiliation, my mother’s answers were always going to be hesitant and full of random moments of silence while looking longingly at the door. So it may be safe to state my methods were flawed. In any case, if this has taught me anything, it’s that sexuality isn’t synonymous with age and sexual unicorns should be saved at all cost.

So, whether or not my previous interviewees have experience with Viagra will remain a mystery. If any of them take Addyi — dear God, I hope not — their secret’s safe with themselves. The only thing I can hope is that future over-sixty-somethings become more comfortable with themselves, their sexuality, and their bodies, or at least talking about them.